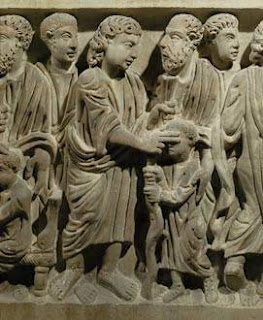 “Look, with all your eyes, look.”  So wrote Jules Verne (1828-1905), the French adventure writer, in his novel Michael Strogoff: The Courier of the Czar, written in 1876.  These words come at a moment when the main character is about to be blinded.

“Look, with all your eyes, look.” They could have been said by Jesus.  Or John. It’s what John’s Gospel wants from us.  Look.  Observe.  Perceive.  See, not the surface of things, but into the depths.  Allow your sight to sink deep into what stands before you.  John invites us to see with our eyes, yet with more than our eyes.  He summons us to observe what’s not obvious, to perceive what’s not immediately apparent.  Poets know how to do this.  Artists and novelists, too.  Sometimes philosophers, even theologians show us how to see, less with our eyes than with our hearts, the eyes of the heart, the eyes of the soul.  The great Renaissance writer Marsilio Ficino (1433-1499) called us “…to see with the eyes of the soul, the soul of things.”[1]

John wants us to see Jesus.  Really see him.  And that’s not easy.  Seeing isn’t always believing.  Sometimes you can see and still be blind.  Sometimes being formerly blind is an advantage because one later perceives things in different ways.  John intentionally plays with metaphors of sight and blindness in this brilliant, somewhat comical story of the man born blind.

We don’t know much about the man.  He was a beggar.  He was probably a familiar sight near the pool of Siloam.  Jesus’ disciples noticed the man and start to engage in a theological discussion on the nature of sin and suffering—all at his expense, mind you!  “Rabbi, who sinned, this man or his parents, that he was born blind?”  It’s a natural question.  We love to find fault, blame someone, blame God for suffering, for illness.  Jesus answered, “Neither this man nor his parents sinned.  In order that God’s works might be revealed in him, we must work the works of him who sent me while it is day” (Jn. 9:3-4).[2]  Jesus wasn’t saying that God caused his blindness in order to reveal something through him.  He’s just blind.  Jaime Clark-Soles, in her wonderful book on John’s Gospel, tells Christians to, “Stop repeating stupid stuff about sin and suffering.”[3] Just stop.  The man was blind.  Asking who was to blame is a waste of time.  Instead, be attentive to what’s before you. Now.

Jesus didn’t ask the man if he wanted to be healed.  He just healed him.  He mixed saliva and some mud and spread the mud on the man’s eyes.  Then he said, “Go, wash in the pool of Siloam.”  He was sent.  And he went.  And washed.  And when he came back he was able to see—and that’s when everyone started freaking out!

His neighbors didn’t recognize him because they identified him with his condition, with his disability.  His identity was wrapped up in his blindness. And because they only saw his disability, he became blind to them.  And so now they’re blind. They can’t see him.  “It can’t be him,” they say.  They only know him as the blind beggar and because this man can see, it can’t be him.  Some said, “It is he.”  But others said, “It must be someone who looks like him.”  “No, no, it’s me,” he says.  “I am the man!” But they still can’t see him.  “How?” they ask.  “The man called Jesus.”  “Where is he?”   “I do not know.”

Then the religious authorities get involved because they’re furious.  Jesus had the nerve to heal on the Sabbath, of all days! The Pharisees, sticklers for the Jewish Law, were more concerned that Jesus dishonored the Sabbath than the healing of the formerly blind beggar.  They’re not celebrating his ability to see.  The Pharisees don’t like him healed, as his healing was a threat to their authority.  It’s an affront to the system.  So they say, “Well maybe he really wasn’t born blind.  Let’s talk to his parents.”  But his parents are of no help, because they’re afraid of the Pharisees.  “Ask him; he is of age,” the parents says.  “He will speak for himself.”  So the Pharisees go back to the blind man and ask, “How could Jesus, someone who violated the Sabbath, therefore a sinner, how could someone like him bring about healing?”  “One thing I do know,” the man answers, “that though I was blind, now I see” (Jn. 9:25). The formerly blind man tried to teach the Pharisees, which they didn’t like so much.  So they drove him out.

When Jesus heard that he had been driven out of the synagogue, he went to find him and asked, “Do you believe in the Son of Man?”  “And who is he, sir?  Jesus said, “You have seen him, and the one speaking with you is he.”  And he said, “Lord, I believe, I trust in you.” And he began to worship Jesus.  “I came into this world for judgment,” Jesus said, “so that those who do not see may see, and those who do see may become blind” (Jn. 9:39).

What causes this kind of blindness in us?  Are you, am I, are we spiritually blind?  We each have blind spots.  That’s for sure.  “Look, with all your eyes, look.”  That’s easier said than done.  It’s been said, “There are none so blind as those who will not see.” First coined by the sixteenth century playwright, John Heywood (c.1497 – c.1580), the rest of the saying goes like this, “The most deluded people are those who choose to ignore what they already know.”

Sometimes we can’t see what’s in front of us because we don’t expect to see it. This is called “inattentional blindness.” It’s not a physical defect or a disease; it’s a condition.  Psychologically, it’s caused by poor attention.[4]  For example, there several awareness tests, videos that demonstrate how this works, which you can find online.  Here’s one:

There are two teams of four, one wearing white, the other black.  There are two basketballs.  The two teams start to move about on the court and you’re asked to count the number of times the team in white passes the ball to each member of their team.  After several seconds, they stop.  You’re asked for the answer.  The correct number is given.  Then you’re asked, did you see the man dressed as a bear doing a moonwalk across the screen?  What?  Huh?  Reverse the video and there you see him, a man in a bear suit doing a moonwalk (like Michael Jackson) across the screen and waving as he goes.[5]  Most people don’t see the bear because they’re not told to look for it, which is the point of the exercise.  By following the directions to focus on the number of passes, we miss everything else going on in front of our eyes. This is called “cognitive capture” or “cognitive tunneling.”

When we focus too much upon what is before us, our view is narrowed, constricted. We see only what we think we’ll see or want to see, instead of what is really there.  When we look too hard and narrowly focus on what we think we need to look at, it’s easy to miss what’s before us.

But there’s another way to see.  In her sublime classic Pilgrim at Tinker Creek, Annie Dillard dedicates an entire chapter to seeing.  (This remarkable, extraordinary book has had an enormous influence in my life.)  Dillard spent a year living along Tinker Creek, near Roanoke, VA, and wrote a Pulitzer Prize-winning account of what she discovered there, watching, observing, reflecting, exploring. If one way of seeing is gained through intense concentration, narrow focus, “cognitive capture” and “cognitive tunneling,” looking really hard, the other way of seeing Dillard says, “involves a letting go.  When I see this way,” she says, “I sway transfixed and emptied.”  It’s the difference between walking with and without a camera.  “When I walk with a camera I walk from shot to shot, reading the light on a calibrated meter,” moving from frame to frame.  When I walk without a camera, my own shutter”—her eyes—“opens, and the moment’s light prints on my own silver gut.  When I see this way I am above all an unscrupulous observer.”[6] Letting go, relaxing the eye, allows her to see something new.

Dillard is fascinated with Marius von Senden’s book Space and Sight, written in 1932. When Western surgeons discovered how to perform safe cataract operations, they ranged across Europe and America operating on dozens of men and women of all ages who had been blinded by cataracts since birth.  Space and Sight tells the stories of what it was like for people to see for the first time, to experience light and color and spatial dimension.  There’s one account, from a young girl, which captivated Dillard.  “When her doctor took her bandages off and led her into the garden, the girl who was no longer blind” saw a tree.  And this is how she described it; she said, she saw “‘the tree with the lights in it.’”  The tree with the lights in it.  A tree ablaze.  What did she see?  Who knows? With no preconceived notions of what she expected to see, she saw a tree—yet more than a tree, a tree that dazzled her in the sunlight.

This story, this image becomes a symbol for Dillard’s own spiritual quest.  She wants to find the equivalent in her life, to let go in order to see something more than a tree, to see the “the tree with the lights in it.”  She writes, “It was for this tree I searched through the peach orchards of summer, in the forests of fall and down winter and spring for years. Then one day I was walking along Tinker Creek thinking of nothing at all and I saw the tree with the lights in it. I saw the backyard cedar where the mourning doves roost charged and transfigured, each cell buzzing with flame. I stood on the grass with the lights in it, grass that was wholly fire, utterly focused and utterly dreamed.  It was less like seeing,” she says, “than like being for the first time seen, knocked breathless by a powerful glance. The flood of fire abated, but I’m still spending the power. Gradually the lights went out in the cedar, the colors died, the cells unflamed and disappeared. I was still ringing. I had been my whole life a bell, and never knew it until at that moment I was lifted and struck. Dillard says, “I have since only very rarely seen the tree with the lights in it. The vision comes and goes, mostly goes, but I live for it, for the moment when the mountains open and a new light roars in spate through the crack, and the mountains slam.”[7]

This!  I resonate so much with this experience.  Eyes that see more than they can tell.  Isn’t that what the light of the world gives to our eyes?

Jesus notices us sitting along the road, blind beggars that we are. He sees us.  And we are seen.  He opens our eyes.  He illumines our lives, allowing us to see ourselves, our neighbors, the world, even God in a whole new light.  With our new eyes, our “born again” eyes (Jn. 3:3), we come to see who he really is.  “I am the light of the world,” Jesus said.  “Whoever follows me will never walk in darkness but will have the light of life” (John 8:12).