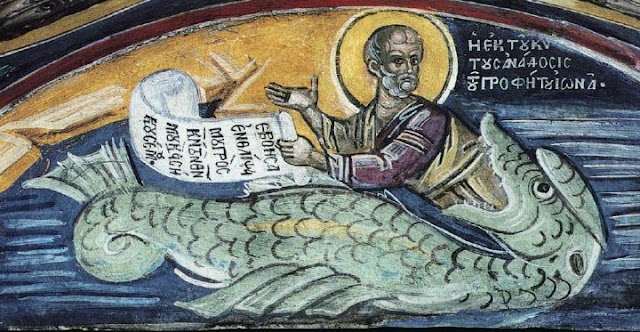 One thing's for sure, the God revealed in the Bible is always full of surprises.  Just when we think we have God figured out, God does something, God says something, God decides something that transfigures everything.  God is the God of the unexpected, who relishes newness and delights in doing a new thing (Isaiah 43:19).  And there are so many stories in scripture that remind us, as well, that the God of Abraham and Sarah and Jesus Christ is complex, rich in paradox, full of mystery, and swimming in nuance.

Consider the prophet Jonah.  We know the story well—maybe too well.  First, there’s no reference to a whale. We’re told that Jonah was swallowed by a “large fish” (Jonah 1:17).  He’s running from his call, running from God.  God sent him to cry out against the “wickedness” of Nineveh.  The city was enormous.  The ancient remains of Nineveh, near Mosul, Iraq, situated between the Tigris and Euphrates Rivers, include the old ramparts that go around the city for 7.5 miles. It was an old city. The area was originally settled around 6000 BCE.  It was “an exceedingly large city, a three-day’s walk across” (Jonah 3:3)—which is an exaggeration.  It’s the Bible’s way of saying that it was big—with a reputation.

And Jonah has no desire to go there.  He ignores God’s command and escapes on a ship that then gets caught in a storm.  The sailors blame Jonah, they assume that God is punishing them because of his sin.  He offers to jump overboard.  Yahweh provides a fish, which becomes Jonah’s home for three days. Living in the smelly belly of a fish gives him plenty of time to think things over and repent.  Then, we’re told, Yahweh “spoke to the fish, and it spewed Jonah out upon the dry land” (Jonah 2:10).  The Hebrew actually reads, the fish “vomited” Jonah upon dry land.  All of this happens in chapters one and two of Jonah.

Then we have in 3:1, “The word of the LORD came to Jonah a second time,” which leads us to think that the story continues.  But not really.  Scholars have shown that chapters one and two are one story; chapters three and four are another story. The link between them is Jonah and Nineveh and the persistence of God’s call to Jonah the prophet.[1]  There’s a scene in Tony Kushner’s Angels in America, a symbolic fantasy exploring America during the AIDS epidemic, in which an angel is sent to one of the characters, Prior Walker, to tell him that he is really a prophet of God. Prior resists, he says he’s not; he says, I’m “a sick, lonely man.”  But the angel says, “You can’t outrun your occupation, Jonah. Hiding from me one place you will find me in another.”[2]  There’s no hiding.

In chapter three, Jonah concedes and goes to Nineveh.  But now he has to face a different set of challenges.  This time he’s not swallowed by a fish, but swallowed, as it were, by this “great city” —and eventually swallowed by grace. What happens there both surprises Jonah and infuriates him.  For he has much to learn about being a prophet, he has much to learn about the nature of Yahweh.

Stay close to the text, for things are not what they seem.  Yahweh says, “Get up, go to Nineveh, that great city, and proclaim to it the message that I will tell you” (Jonah 3:2).  So Jonah goes to Nineveh.  He enters the city, a day’s walk, and then cries out, “Forty days more, and Nineveh shall be overthrown” (Jonah 3:4)!  Jonah warns this wicked city.

But Jonah completely misjudges, completely miscalculates the situation.  He makes assumptions about the city, and about God.  What Jonah doesn’t know is that while this city might have a reputation, this exceedingly great city is great to God. In Hebrew, being “great to God,” suggests divine ownership, divine favor, and divine presence. And God has God’s own plans for city of Nineveh.

Jonah is sent to proclaim a message from Yahweh.  But did you notice that Yahweh never actually gives a message?  Jonah begins to speak, but is it really the word of the Lord?  This word of warning, assuming God’s judgment and complete annihilation is Jonah’s, it’s not from God.  When prophets speak in other prophetic works, such as in Isaiah or Amos, we often find the prophet saying, “the word of the Lord,” or “thus says the Lord,” followed by the message.  These qualifiers are missing.  We just have Jonah’s words.  And, unlike other prophetic utterances, Jonah fails to say why Nineveh will be overthrown.

But the people of Nineveh believe his message—his false message—nevertheless!  And, then, to his utter amazement and disappointment, the entire city proclaims a fast, its citizen put on sackcloth, and they examine themselves—they take a deep, honest look at their sin.  They do all of this because the people “believed God.”  Now, the Hebrew word for God here is Elohim, which is a plural noun, meaning “gods” or “deity.”  In other words, it’s a generic word for God. They believe in Elohim, a generic god, but not Yahweh—and it’s clearly Yahweh who sent Jonah to them, with a special word. This city doesn’t really know Yahweh, yet they are “great,” special to Yahweh.

Then the king hears what’s going on.  He, too, puts on sackcloth and sits in ashes and examines his sins and the sins of the people.  He joins the people in an act of repentance, confession, acknowledging the sins oppressing the people, sins which they believe anger God.  As king, he’s concerned for the welfare of the kingdom, he does what is best for them.  He wants to identify the evil within himself and among them.  He’s not afraid to name evil, evil.  Everyone must fast, including fasting from water.  Even the herds and flocks need to repent. They, too, shall not drink; they, too, must wear sackcloth. I’m not sure what the animals did wrong, but obviously they need repentance! Humans and animals, together, enter a time of corporate confession.  A good leader leads a people to acknowledge sin and wrong and evil, and not run from it, not deny or make excuses or blame other people. A good leader leads with humility and fears the righteous judgment of God.

In verse 10, we read, “When God saw what they did, how they turned from their evil ways, God changed God’s mind about the calamity that God had said he would bring upon them; and God did not do it.”  This is confusing, I know, because God never says God will bring calamity upon them; those are Jonah’s words.  And it makes it look as if God, like Jonah, was really eager to judge and destroy them, but had a change of mind when the people repented.  But is this really how it works?  Do we get to change God’s mind? Do we get to control God’s actions?  Was God only motivated to change God’s mind, to repent of what God was about to do, because Nineveh got its act together? Is the moral universe really built on cause and effect?   What about grace?

It’s complicated—it always is.  And English does a disservice to the Hebrew.  Phyllis Trible, one of the great biblical scholars of our age, who taught Hebrew Bible at Union Theological Seminary in New York for many years, bemoans that both the NRSV and the NIV translations obscure what’s happening here.  The people of Nineveh turn, repent, and change their ways, and God turns—but they’re not part of the same turning.  This is critical.  The Hebrew word used to describe Nineveh’s turn away from evil is not the same word used to describe Yahweh’s turn from judgment to mercy.  “Although mutual acts by the Ninevites and God eradicate evil, they turn on separate verbs.  In other words, God’s response comes on God’s terms.”[3]  It cannot be forced or manipulated.  As Jonah came to discover, God does not do evil—even when the people are evil and deserve judgment.

So what does Jonah do when he discovers that Yahweh is gracious?  We read, “But this was displeasing to Jonah, and he became angry” (Jonah 4:1). The Hebrew is even stronger, “and it was evil to Jonah an evil great…,” and “it burned him.”  He’s burning up.  Jonah’s furious.  The story ends with Yahweh saying to Jonah, “And should I not be concerned about Nineveh, that great city, in which there are more than a hundred and twenty thousand persons who do not know their right hand from their left, and also many animals” (John 4:11)?  That’s how it ends.  The city was obviously overrun with unruly animals!

Whoever wrote Jonah—and scholars have no idea who wrote it or where—the guy had a sense of humor.  He—assuming the author was a he—was also a sophisticated theologian.  He offers a nuanced understanding of our relationship with God.  We learn that God is concerned with people we least suspect are deemed “great” in God’s eyes.  God’s ways are not our ways, so we must resist judging too quickly.  We have to be very careful how we listen to those who speak on God’s behalf, because sometimes what is heard from prophets is not coming from God, but from the prophet’s ego.  We need to be cautious about saying what God is or isn’t doing.  God’s ways are not our ways.  And we also discover that “we are always coming in on something that is already going on.”[4] We’re always entering into something that God is doing, into something that is already happening, already going on, which precedes us.  We need to act with humility and openness.

We also learn the value of corporate confession, in addition to individual confession.  We need to confess collective or systemic or national guilt and sin—which is almost unheard of these days.  We learn the importance of having people in leadership, people called to care for the welfare of all God’s people, who place their actions and the actions of the collective before the light of God’s judgment.  This all sounds quaint these days, something out of Never Neverland, but it reflects just how far we have fallen in our age.  Jesus actually praised the people of Nineveh and gave them the right to judge his own generation, because at least they repented.  His generation could not see “something greater than Jonah” in Jesus (Matthew 12:38-41).

There’s much to take-away from this remarkable story, much to explore.  Most of all, we probably learn: don’t be like Jonah. Be careful that you don’t succumb to evil.   And don’t be surprised by God’s grace and mercy, and don’t be angry—yes, it’s okay to be angry, and, perhaps we need to be more angry about so much in the world these days—but don’t be angry when God is being gracious.  Be open to surprises. Be open to grace. Be open for the new thing. For, God loves—loves, loves, loves—to astonish us! 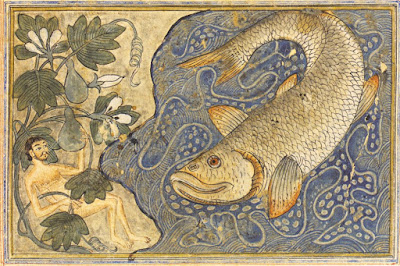