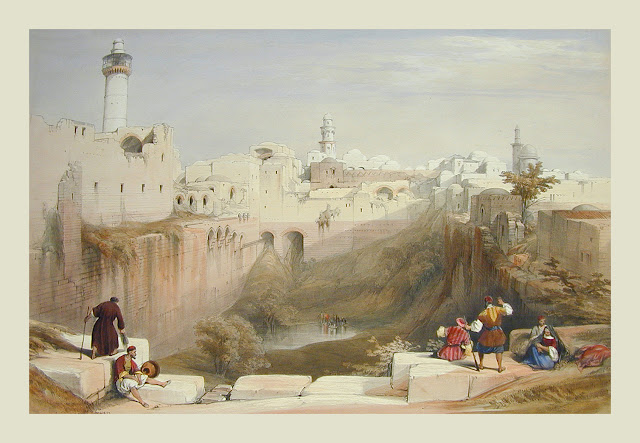 Eighth Sunday after Pentecost
Sacrament of the Lord’s Supper

“Now that day was the sabbath” (Jn. 5:9b).  Six simple words (seven in Greek), tucked away in this story.  The first nine verses in chapter five focus on the healing of the paralytic at the Pool of Bethesda.  We don’t know his name, but we know he’s been ill for thirty-eight years.  He’s in the company of others like him, “invalids,” we’re told, “blind, lame, and paralyzed.”  Jesus approaches this man, asks him if he wants to be made well.  The man tried to get into the water when, tradition has it, the water stirred and its healing properties were most potent.  But he could never get there. Someone always got in his way.  So, Jesus heals him, by-passing the pool altogether.  “Stand up, take your mat and walk.”  At once the man was made well, and he took up his mat and began to walk.

There’s much to be explored in this healing story.  There are many directions we could go with this text.[1]  We could explore the relationship between sin and disability.  Jesus tells the healed man, “See, you have been made well! Do not sin any more, so that nothing worse happens to you” (Jn. 5:14). This is a tough text.  Is Jesus saying that disability is caused by sin?  We could explore the relationship between disease and disability and health.

We could explore individual culpability and healing.  Who is to blame?  Jesus asks the man whether or not he wants or wills to be healed.  He says he does, but he seems to offer an excuse.  Do we stand in the way of what we say we want in our lives?  But we have to be careful that we don’t blame the victim.

Maybe there’s a problem with the healthcare system.  Today, many hospitals are named Bethesda. The pool is part of the ancient healthcare system.  He’s been under its care for thirty-eight years and he’s still looking for a miracle cure, as life passes him by.[2]  Maybe he just saw himself permanently sick; being sick was his core identity, an identity reinforced by society.

Maybe we shouldn’t focus on the individual man, but turn, instead, to society as a whole.  We have here “invalids,” people who have been at the pool, searching for healing for some time. What does this say about society, failing to care for those in need?  Is the man, as some contemporary scholars suspect, the victim of cultural forces, “disabled by the Roman Empire and his own society, a territory occupied by Rome”?[3]  We know, for example, how deeply “the politics of a society get mapped onto real bodies, particularly bodies considered deviant from the [normal or] normate body of a given society.”[4] The violence of society is marked on our bodies.

Yes, we could move in all of these directions; each approach is worthy of our attention.  But we’re told that the day that Jesus chose to approach this man and talk to him and heal him and offer a new direction in his life, “Now that day was the sabbath.”  And it’s because the healing takes place on the sabbath and because Jesus tells him to take up his mat and walk on the sabbath, thus performing work on a day that one should rest, that the religious authorities are furious.  “It is the sabbath,” they say, “it is not lawful for you to carry your mat” (Jn. 5:10).  The healed man is in serious trouble and he blames it all on Jesus.  The religious authorities eventually find Jesus and start badgering him for healing on the sabbath.  Jesus replies, “My Father is still working, and I am also working” (Jn. 5:17), which infuriates them all the more.

Is Jesus’ breaking the Torah/Law by ignoring the sabbath?  Are we breaking the Law by ignoring the sabbath? How many of us truly observe a day of rest?  Christians have an ambiguous relationship with sabbath-keeping. Some say that Christians aren’t bound by the Old Testament Law, that we don’t have to worry about observing the Sabbath.  Is Jesus rejecting the Rabbinic sabbath laws?  He does this often in John’s Gospel.  In Mark’s Gospel, Jesus allows his disciples to pluck ears of corn on the sabbath (Mk. 2:23).

What if we turned this around?  Instead of viewing Jesus’ action as a violation or rejection of the Law, what if healing is what the sabbath is for?  Jesus did not abolish the Law, he came to abolish the dead letter of the Law; he judged reductive legalism, the binding, constricting literalism that prevents God’s people from seeing the purpose of the Law, including the sabbath.  Healing this man on the sabbath, inviting the man to get up and walk on the sabbath, sending him into life healed, forgiven, restored, renewed tells us something about what the sabbath is for!

In his classic work, The Sabbath (1951), rabbi and theologian Abraham Joshua Heschel (1907-1972) wrote, “There is a word that is seldom said, a word for an emotion almost too deep to be expressed: the love of the Sabbath.”[5] And why is it to be loved?  Because it’s time set apart, hallowed (that’s what hallowed means, “to set apart”), to rest and delight in the goodness and love and faithfulness of God.  It’s time to rest, but rest is in service to renewal and restoration. It’s not only hallowed time, set apart for our rest, it is time for God’s rest, when God is fully present in the creation.  The sabbath might be a day absent of work, but not absent God’s presence and glory and joy.

Actually, significantly, the Hebrew verb “Shabbat” does not mean “to rest” but “to be complete.”  It refers to completeness.  “Shabbatu, the noun, means in Babylonian a cycle in a chronological sense, the day on which the moon completes its cycle, the day of the full moon.”[6]  Shabbat means completeness.  Lacking nothing. Full.

Shabbat, completeness, is the goal or end or purpose of creation.  It’s a day for feasting, for delighting in creation.  Because it’s the day when we share in the completeness and eternal presence of God, feasting in God’s glory, it’s also the day of redemption, it's the day of renewal, the day of new beginnings.[8]

Heschel reminds us that while an emphasis on excessive observance of the sabbath could have led to the “deification of the law,” for the most part, it didn’t.  “The ancient rabbis knew,” he writes, “that excessive piety may endanger the fulfillment of the essence of the law.”  “There is nothing more important, according to Torah, than to preserve human life… Even when there is the slightest possibility that a life may be at stake one may disregard every prohibition of the law.”  One must sacrifice [the command or] mitzvoth for the sake of man rather than sacrifice man “for the sake of mitzvoth.”[9]  The purpose of the Torah, he says, is “to bring life to Israel, in this world and in the world to come.”  To bring to life.  Heschel extolls us to, “Call the Sabbath a delight: a delight to the soul and a delight to the body.”[10]

We’ve been exploring expressions of compassion throughout the summer.  There’s no mention of the word in this story.  The healing, though, was an act of compassion.  The giving of sabbath itself is the gift of a compassionate God.  As Jesus showed throughout his ministry, the sabbath is a day to experience God’s goodness, to rest in the joy and grace and love of God.  It’s a time that is life-giving, calling us to true life.  It’s a time of stillness, peace, and harmony, which can yield healing and wholeness.  It’s time to experience the compassion of God toward us.  It's time to rest and to be restored.  It’s time set apart for renewal.  It’s time to feast, to celebrate, to taste and see that God is good–every good.